The History Of Illustration

Ernest Shepherd was born in London on 1st December, 1879 and from that day until his untimely death at the grand age of 93 on 24th March 1976 he experienced amazing success and unimaginable tragedies.

Shepherd came from an artistic family, his father, Henry, was an established architect and his mother, Jessie, was the daughter of well-known water-colourist, William Lee. It is no surprise that this upbringing led him to his career as an illustrator. When he was just 10 years of age, Shepherd experienced his first tragedy, his mother died.

Whilst pursuing his career in illustration, he enlisted into the Royal Artillery and fought during World War 1. During his service to his country he continued to illustrate and submit ideas to Punch, whom he ultimately wanted to work for. Upon returning from his four-year service he was ranked as a Major, received a Military Cross and also had an offer from Punch to join the “table”. This would mean a regular income for him and his wife. During his time at Punch, Shepherd was recommended to A.A Milne who needed his children’s stories illustrating in order to be published.

During the creation of Winnie the Pooh Shepherd drew inspiration from Growler, a teddy owned by his son, and the creation became the famous Winne The Pooh.  A.A Milne purchased a farm in Sussex which would later be known as the inspiration for Shepherd’s Hundred Acre Wood. Shortly after the success of Winne the Pooh, Kenneth Grahame approved Shepherd to work with him on The Wind in the Willows. Unfortunately, although they worked together in the beginning Grahame did not see the finished version of the illustrated book as he died before it was published.

Although Ernest’s work may look dated now at the time he used the media available to him. After exploring various kinds of media, including a brief and unsuccessful time with oil painting, before creating his illustrations using pencil sketches and then later water-colour to colourize his illustrations.

I love the anthropomorphism of the illustrations by Ernest Shepherd. This style of illustration really excels at being suitable and interesting for children.

Below I have created my own image in the style of Shepherd. I have chosen to stick to his anthropomorphism and used animals in clothing, specifically ballet clothing. I have chosen to adopt his outlined style with minimal detail, Shepherd’s images also didn’t use too many different colours which is why my image only has 4 colours and I have used different shades of the colours to add detail and tone. 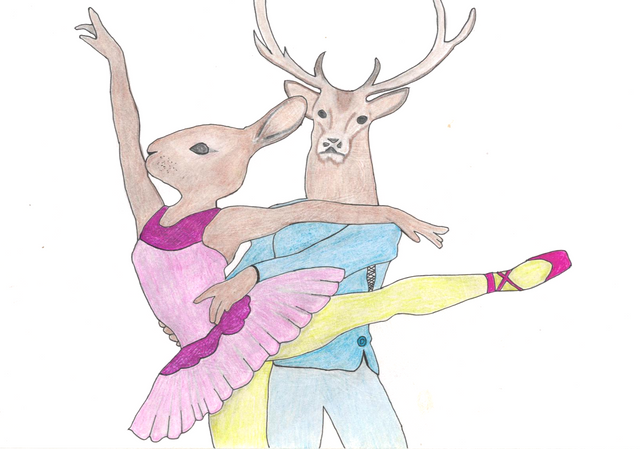 Julian Opie was born and raised in London and continues to live and work there to this day. He

Opie’s style of illustration is simplistic and he strips back all detail from his portraits and reduces his subjects to a minimum of lines and blocks of colour.  The images have no depth and the content of his images is usually face on.